On Saturday night, Books Illustrated hosted a celebration for the iconic picture book ‘Possum Magic’ written by Mem Fox and illustrated by the amazing Julie Vivas 30 years ago.

It was a full house attended by many and with the wine flowing, open fires burning and the original artwork from Possum Magic hung around the place, it was a joyous occasion. 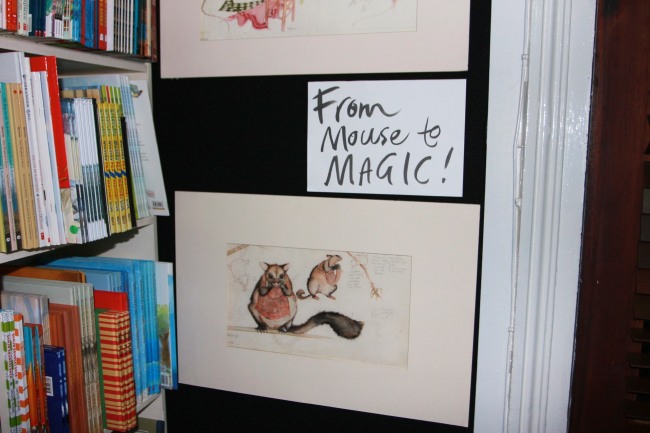 I met some old friends, my Maurice Saxby Mentor, Anna Walker and Erica Wagner from Allen & Unwin and I made many new friends including, Julie Vivas, Sue De Gennaro, Jane Tanner, Craig Smith, Francesca Rendle-Short and Sally Rippin. I also met the lovely Geri Barr from the Australian’s Children’s Literature Alliance and the gorgeous Justine who works for Ann and Ann at Books Illustrated.

Everybody was so friendly and happy to talk shop, it was great fun for me to gain an insight into how illustrators go about their work. I have to admit I was particularly relieved to hear about other’s people struggles with colour palette and character development.

We all enjoyed hearing more about Julie Viva’s journey in illustrating ‘Possum Magic’.

‘Possum Magic’ was originally called ‘Hush the invisible Mouse’ and after being rejected by nine publishing houses (yes, nine I hear you say) Omnibus in Adelaide took a chance on it. They had just published Kerry Argent’s ‘One Wooly Wombat’ and were looking for other stories with an Australian theme. So, the mice became possums. Mem Fox reworked the story and Julie created new illustrations and the rest is history.

At first, Julie began drawing real possums. She used to go to the night house at Taronga Zoo. She drew brush tail possums in every position until she got a feel for their body proportions and how they moved. She also looked at the injured baby ones at the Zoo hospital, too. After this, Julie then felt a bit braver about inventing her own possums. Julie explained that doing Hush as invisible was tricky but something as basic as using a broken line seemed to work.

Julie simplified her possums, making their bodies big spheres and their heads small spheres with triangular faces. Tails and arm and legs were used for expression.

When Julie hung Grandma up by the tail she could see how this worked. In this form, not looking like real animals, Julie was able to ease them through their bike riding and their umbrella boating without it jarring too much.

“The human emotions that the possums go through are possibly easier to cope with in their visually unreal form. Early in the process, I realised real possums’ eyes are so big they take over. I felt that they took attention away from everything else in the picture, so I did adjust their eyes and this was another step away from reality.”

When it came to the colour palette Julie said she was afraid of large areas of strong colour, but colour roughs helped her decide, as the characters came into another life when the colours were applied. Using blues and purples in the fur seem to give relief from the expected brown and grey. The shape is so important, and Julie didn’t want anything to distract from that. Everything changes in a drawing when solid colour is used. The use of darker grey for the koala helps convey the weight of this character. Julie said it’s often difficult to get the balance that she had in the drawing when she start to paint.

Fascinating stuff. Stay tuned, as Julie Vivas will be the featured illustrator on my blog next month.

Julie also had on display some of her gorgeous illustrations from her latest picture book Davey & the Duckling soon to be released through Penguin Books and another of her well loved picture books Let the celebrations Begin has just been released in the Walker Australian Classic series. There was a lot to celebrate! 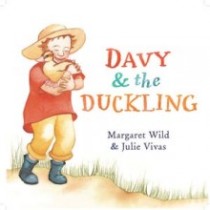 We also got to see some of the amazing books and artwork collected by Ann and Ann at the Bologna Children’s Book Fair this year. Some of them very dark in colour palette and fascinating in there concepts. 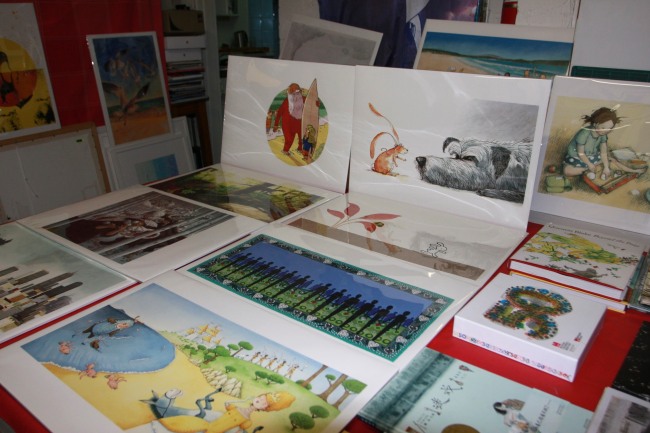 Thank you so much to Ann and Ann and Justine – it was truly a beautiful and inspiring evening.

You can read more about it on the Books Illustrated Blog http://booksillustrated.blogspot.com.au

Reference: an extract from an interview with Julie Vivas, Scan Vol 23, no.2