Hi Jo, thanks for coming onto my blog today. You are one multi-talented person…it never ceases to amaze me what incredible things people are capable of. You’re a comedy writer and performer with TV, and you have improvisation and theatre experience. You’ve written for shows on nearly every TV network including a three year gig as Head Writer for the Logies (wowzers – that’s awesome girlfriend).

Tell us, is your knack for comedy hereditary or did you foster this skill yourself?

I’m sure I absorbed things growing up – my Parents were/are both Academics (do you ever stop?) and word play abounded at the kitchen table. My three big brothers no doubt ’rounded out’ my comedic education – teaching me the finer points of a quality fart joke, and letting me pinch their MAD Magazines. (Not sure if it was the most suitable reading for a 6 year old girl?)

Is there anyone else in the family with who draws or paints?

My Brother Chris is a very talented drawer. Mum too – though she doesn’t tell anyone. I’ve discovered travel notebooks of hers with gorgeous ink drawings in them.  Dad does a killer stick figure and still draws pictures of him and Mum holding hands on her Birthday cards.

How on earth did you get into illustrating? Tell us a bit about your background?

I studied political science at Uni, worked as a PR consultant for nearly 10 years, and then, wanting to pursue something more creatively fulfilling, I switched to writing and performing comedy.

I’ve been drawing cartoons off and on since I was about 8 or 9 – just for my own pleasure. When I was 13 I was the editor, writer and illustrator of the brilliantly-titled Gill Persons Journal. A magazine just for Mum, Dad, my big sister and big brothers. Yep. Circulation: 6.

I suspect David Lawrence was snooping when he saw some of my drawings in a notebook and thought they’d be fun for Fox Swift.

Tell us about your input into Fox Swift? How long did it take to illustrate?

David let me read each draft chapter as it was hot off the press. I’d make the odd suggestion about a character, or suggest a tangent that I thought might be good fodder visually.

Once the picture idea was there, or the joke ‘hit me’, the cartoons were super quick to draw.

Given they are being drawn ‘on the spot’ by Lewis (one of the young characters in the book), polishing them was not really an option. The quicker the better – which felt true to Lewis’s spontaneous style.

How did you develop your ideas?

Pretty much the first thing that came into my head! The text was so suggestive comedically it didn’t take long to come up with a visual twist.

How would you describe your illustrating style?

Naïve, crude, untrained, technically no idea what I’m doing.  Just trying my best to tell a joke through simple pictures. Hopefully it’s a non-threatening style that says ‘Anyone can draw – Go for it!’

What medium did you use?

My iPad. I have a stylus and draw using an app called Paper. The app feels like drawing in a notebook, except you can delete whole pages without feeling like you’re wasting real paper.

Sitting on the floor of my living room with my back up against the heater. I even did a few in bed.

Yay. I love writing in bed although it’s not always so good for your neck. 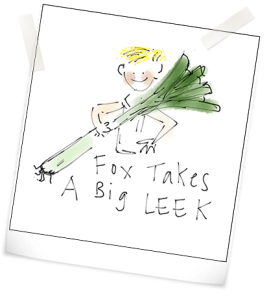 What were some of the biggest challenges in illustrating Fox Swift?

Lying to myself that these pictures were really just for me and that no-one else would see them. That way I could draw with ‘abandon’ and silence any self criticism.

What did you like most about illustrating for children?

That I could write ‘poo’ and ‘bum’ and ‘snot’ in the captions and get away with it.

Yeah. That is fun.

Do you have a favourite illustrator or cartoonist and why?

I love Andrew Weldon’s work. He just nails it. His stuff is fridge-worthy.

And Shaun Tan. He’s a genius.

What’s your next project?

Hmmm … for now, I’ve gone back to writing joke questions for Who Wants To Be A Millionaire Hot Seat.  Maybe it’s time to re-launch Gill Persons Journal … Counting the in-laws, and nieces and nephews since its launch all those years ago,  the circulation could swell to 12.

Count me in. I love it, although your love for Peter Landy is a little disconcerting. 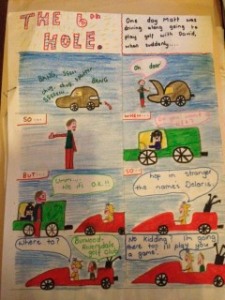 www.jogill.com.au (check this out, it’s a very cool website)

Well, thanks Jo for coming to my blog today, we absolutely love ‘Fox Swift’ and your illustrations truly complement the story, making it a wonderful reading experience. So congratulations and goodluck with your new projects.

It’s also available through itunes as an ibook, and Jo’s illustrations are in colour.

Why didn’t they publish your illustrations in colour, Jo? They look awesome in colour.

It’s a real shame though…