Following up from my interview with Children’s Writer, Nadine Cranenburgh…

Nadine has very kindly put a list together for us of ‘Ten Graphic Novels and Visual Stories: by Australian Creators’.

Thanks Nadine, I can’t wait to work my way through this list if books.

Hi Neridah, some of these aren’t really ‘graphic novels’ in the commonly accepted form, but use visual storytelling as a significant part of the narrative. That’s why I thought that maybe a better title would be ‘Ten Graphic Novels and Visual Stories by Australian Creators’.

Sounds good to me.

This list includes books for younger readers, teens and adults. There is probably a crossover in audiences, though, so my opinion isn’t definitive. I’ve used a very broad definition of ‘graphic novel’ here, including wordless picture books, illustrated novels and strange and wonderful amalgams of text, illustrations and more.

What they do have in common though is that they use visual storytelling (or a series of picture panels, with or without dialogue) to carry a significant part of the narrative; or use illustrations to provide an extra level to the story.

The audience definitions are also very subjective, and I’d recommend parents having a look at books to see if they agree with my judgement!

Also, it is far from a complete list, there are many other books out there that I haven’t had the pleasure of meeting yet, and many more still being created.

For younger readers (or all ages, if you like):

‘The Hero of Little Street’ by Gregory Rogers. A wordless picture book, Book 3 in the Boy Bear series. The Boy escapes a gang of Bullies by slipping into a Vermeer painting, meets a dog, and has an adventure in seventeenth century Holland. The first two books are on my to read list.

‘The Nelly Gang’ by Steven Axelson, trailer here: http://www.youtube.com/watch?v=CuuGtAejBf4. I haven’t read this yet, but it looks amazing.

‘The Arrival’ by Shaun Tan – This is an incredible story told without words, about moving to a new country and the strangeness, trials and wonders that entails. It is set in a fantastical world, but with many things that we can relate to. I know teachers who have used this book as a resource in the classroom with a great response from kids. I prefer to just enjoy and share it with my boys. 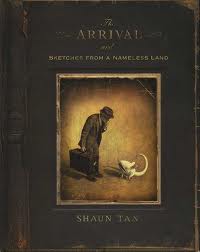 ‘How to Heal a Broken Wing’ by Bob Graham – This is a wonderful picture book that uses visual storytelling for most of the narrative, with only very sparse (but beautiful) words to support it. A bird crashes into a skyscraper window and falls to the ground near Nelson’s Column in London. As the crowds swarm past, young Will, coming out of the underground with his mother, stops and helps. A touching story which works on many levels. It is endorsed by Amnesty International.

Getting older (teenage and up, although parents may choose to share with younger kids, I have)

‘Kate’ by Kevin Burgemeestre – This is a recent illustrated novel which combines a written story with several detailed illustrations, incorporating text motifs, which are presented as the work of the thirteen-year-old protagonist, Kate. It’s a compelling story which handles some hard-to-face themes sensitively for a young teenage audience and up. After a frightening encounter in a park, Kate is saved by the tough and elusive Mal. This sets her on a dangerous adventure, pursued by men who are convinced she has stolen something from them. Kate’s experience in drawing the illustrations is included in the text, and I think they add an extra level to her characterisation (her hero is artist Frida Kahlo).

‘Beyond the Dusk’ by Victor Kelleher and Gregory Rogers – This is a book I picked up secondhand (it was published in 2000, so it may be out of print). It is an illustrated novel which tells the story of Meg as a young teen in the mid-twentieth century. She is living with her grandmother on a farm, and feeling isolated from kids her own age and adults, who shun her for her ‘tall tales’. The tale follows Meg as she investigates a mysterious predator that is spooking the livestock. It turns out to be something very unusual indeed, but I won’t spoil the surprise. There are not many illustrations, but they are atmospheric and stark, really setting the mood.

‘Hamlet’ staged on the page by Nicki Greenberg – A visually stunning interpretation of the play, which takes the form of a cast of fantastical actors performing staging a production. The author has added wordless scenes showing what goes on behind the curtain as the play is performed, which adds another level of drama. I’ve been reading through it with my six-year-old, and we’ve had some very interesting discussions. Nicki also adapted ‘The Great Gatsby’ into graphic novel form.

‘Requiem for a Beast’ by Matt Ottley – This is an incredible book, that explores some dark and complex themes (murder, the stolen generation, depression) through a mixture of text and illustrations. There is also an accompanying CD with original compositions by Ottley, and which is a companion to the book. A young man goes to work as a stockman, and tries to come to terms with his father’s grim past. Although this is definitely a work for older readers, I have shared some of the illustrations with my young son – he actually picked the book up in a second hand store as he was attracted to the pictures. We’ve talked a little about the stolen generation, and I look forward to talking to him about some of the more complex themes as he gets older.

Older again (mainly because the story is told by older narrators, but that’s just my opinion)

‘Sensitive Creatures’ by Mandy Ord – This is a really sweet and funny collection of graphic short stories by Mandy Ord, many of which she self-published or published in literary journals before being approached to publish a graphic novel. It is set firmly in Melbourne, and covers many subjects we encounter daily: family relationships, friendship, dog ownership and dealing with bureaucracy among them. They are tied together with scenes of Mandy trying to get through a day of creating and procrastinating, which many writers and illustrators will relate to.

‘The Sacrifice’ by Bruce Mutard – this is on my to read list, and is a complex book set in Melbourne during World War II. Wow – that’s quite a reading list – one of which I’m going to get cracking on ASAP. I’m off to the library!

Thanks so much Nadine for your time and insightfulness on Graphic Novels and Visual Stories.